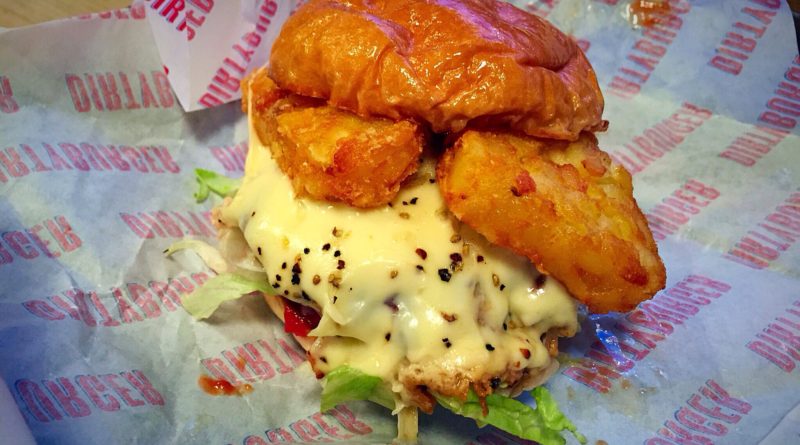 Under the arches in Vauxhall, Dirty Burger serves sinful breakfast burgers and cheeseburgers with crinkle cut and onion fries.

I went to Dirty Burger with my mind set on the Dirty Bacon, one of only about three or four burgers on the menu. You know what I think about bacon!

But when I got into their Vauxhall joint, my eye was drawn to the Special, which has hash browns and Gouda cheese. I couldn’t decide but the extremely cheerful and friendly Giorges at the counter helped.

He said the dirty bacon burger has mustard in the sauce, which makes it a little sour. The special doesn’t so it isn’t.

I felt that the special was going to suit me better, so that’s what I’m going with.

Inside is like being inside a big wooden box. Like so many of these cool burger places, decor is very minimal. But that is fine.

It’s freezing outside, the door doesn’t shut properly and there is no discernible heating apart from the grill. There are also a couple of tables outside but unsurprisingly they are empty.

At this point, I was amazed this is part of the same company as Dean Street Townhouse (a warm, comfortable classic place, one of my favourite spots in London, where you can, if so inclined, enjoy a G&T at 7 o’clock in the morning).

As I waited, which wasn’t long, a Deliveroo man came in.

To the uninitiated, and most of the country, that is one of a handful of food delivery companies that will, for a small fee, collect your food from a number of food outlets and deliver within a limited radius.

A lot of the London burger places use them. As far as I can see, it’s irrelevant news for most of us outside the Oyster area.

In fact with Netflix, Deliveroo, Ocado and Taskrabbit, I’m surprised Londoners actually bother going out at all.

But Dirty Burger is managing to be cool. And dirty. Dirty is cool, isn’t it?

When my order arrived and I unpacked the neat wrapping, there was sauce and cheese and mess everywhere as it is meant.

As I started taking my pictures, Giorges clocked what I was doing and started shouting “Twitter” “Twitter”. I suppose they are very used to blogging going on and are fine with it.

First thing that stands out, unsurprisingly, are the hash browns. Two big ‘uns on the top. And loads of cheese that looked like it had been peppered. On the bottom, under the patty, huge amounts of tomato sauce.

The bun is small, soft and squidgy, so all the dirty sauce gets right into it and is soaked up.

When I got stuck in, I thought that perhaps the hash browns might just be a gimmick offering nothing besides extra carbs.

But I was wrong. They were lovely and crispy and added quite a substantial flavour to the whole thing. I suppose at a push this might be seen as Dirty Burger’s version of the Marty McFry secret menu item.

The overriding flavour was probably the sauce, and the chap was right – it did have a nice sweetness. It was actually very good.

The chosen cheese was Gouda, and there was lots of it.

I’ve only once ever had a strong-tasting Gouda (and that was from a goat). Like Edam, it is very mild, and here was no exception. Because of the amount, it added a welcome fluffy warmth that most cheeses do, but little in the way of its own taste.

In the middle of all of this was a terrific patty.

I’d watched it being done on the flat grill, with the cheese bubbling all over it. A tremendous sight. The level of cooking was good, with a thin residual strip of pink in the middle.

The beef itself was tasty. This wasn’t gourmet fayre, but it wasn’t trying to be. The place doesn’t even have a toilet – it is primarily takeaway.

The menu was also short – only a couple of types of burgers. But it is a lot of fun – good stuff done well. It probably gets very, very busy.

I expected to be impressed and I was impressed. But I was cold.