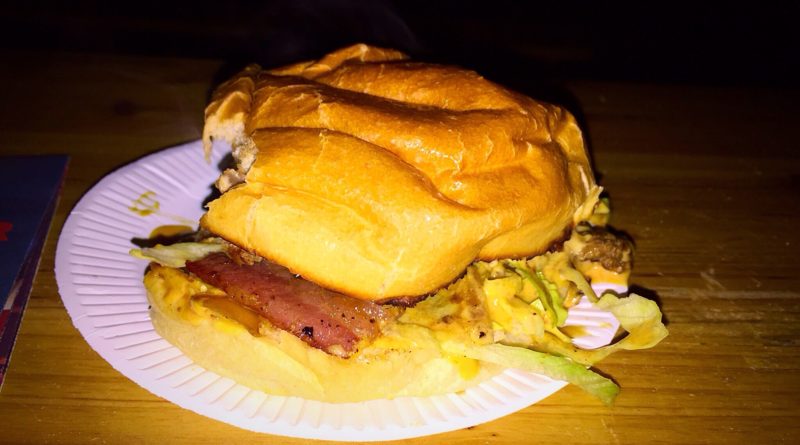 Putting Cows between buns since 2012 Good meat and great buns.

It looked great as I carried it back to my seat, and it smelled even better.

The bun was golden and squashy – well chosen, and the combination of the melted cheese and sauce were heading up the top-notch aesthetics.

So how did it taste? Well, in my first few bites I’m afraid what I got more than anything was salty. Don’t know if it was the bacon, or the seasoning on the beef, or more likely both, but unfortunately it was erring towards overpowering.

A few more bites in and while it didn’t become less salty, I did become more accustomed to it, and was able to appreciate the combination of ingredients more.

Seasoning aside, the beef here was pretty good. No idea what the mix of cuts was, but it had a good flavour, and there were two of them! I’d also watched it being made and assembled, which is one of the benefits of “street food”.

The proprietary cow sauce and pickles here were the stand-out combo. Together they sat above the meaty onslaught and the oodles of gooey cheese to create a lasting and very enjoyable taste.

The beef itself had plenty of pink, as promised, and went down well. The bacon, I almost felt was a little unnecessary and its absence might have, in this case, actually helped the great sauce work even better (yes, I just said that). As it was, it was very well done and decidedly crispy.

The other ingredients were visible, just, in the darkness, but not terribly apparent to the taste. That’s nearly always the case with lettuce though.

Overall, it was a pretty good burger, well made, with good thought to the combination of elements, and an excellent sauce. If the salt could just be toned down a bit, this would be pretty unforgettable.