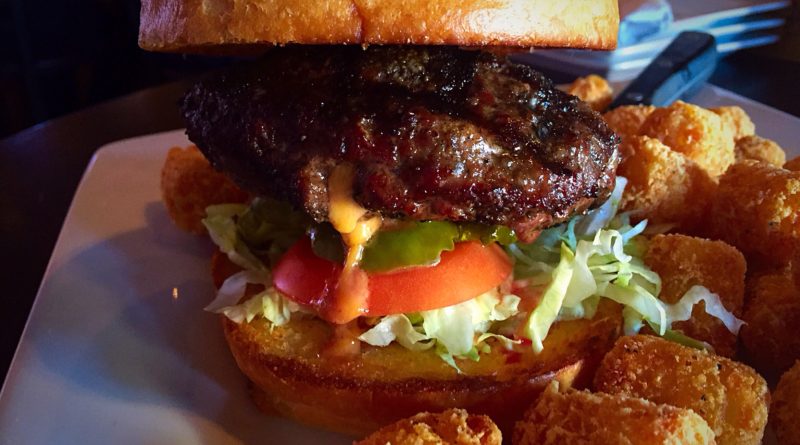 We feature freshly hand formed beef burgers, cooked to order. We use the freshest ingredients possible. Our salad dressings are house made. House made potato chips. We hand craft our veggie burgers as well. Cheddar-jack stuffed patty, lettuce, tomato, pickle.

With a name like this, what’s not to like. Cold Beers and Cheeseburgers knows what it is, and has a massive choice of both burgers and beers. It also has a build your own burger option, which generates literally thousands of combinations.

Essentially it’s a bar though, and a busy one at that. The bar itself occupies a large square in the centre of the room and large screens show all kinds of sports like netball, rounders and ice skating.

I hadn’t made my mind up as the choice was too huge, but earlier in the day both the venue and the Juicy Lucy had been recommended to me, so that’s what I was going to have.

Juicy Lucy, as you must know, is where the cheese is cooked inside the patty instead of being melted on top and if done right, it’s usually very juicy, hence the name!

So I was seated and my order taken. I was asked how I wanted it cooked, and I did notice on the build-your-own menu, that the full range from rare to well-done was available. I chose medium.

I was also given a choice of sides, and I chose tots rather than fries. As mentioned in other reviews, these are like little potato croquettes.

I took in the surroundings as I waited, watching but failing to understand the sports being shown on the TVs. It wasn’t a long wait before my meal came out and it was enormous. A large burger containing a large patty, accompanied by a large amount of tater tots.

I had some of the tots first. Crunchy on the outside and hot and fluffy on the inside, just as they should be. There was no way I’d be finishing them all though. Far too many.

The burger itself was a giant stack. It makes sense that the patty would be thick, given that it had to have space for a central cavern of molten cheese. The toppings, being the standard tomato, lettuce and pickle, were all underneath the patty. Can it still be called a topping if it’s underneath rather than on top?

At any rate, I chose to leave the tomato in, something I find myself doing more often these days. Perhaps I’m becoming slightly less anti-tomato in my old age. Who knows?

The outside of the patty seemed rather black for a medium, but inside was about pink enough, so I suppose it was fine. I’d have called it medium-well actually, but I’m not a chef.

The bun was very robust, as perhaps it needed to be for such a large burger. The lettuce and tomato provided a bit of taste as did the pickle. Sometimes I find the pickle to be overwhelming but it wasn’t in this case. Quite big, and very crunchy, but it didn’t take over too much from the meat.

As I was eating my first few bites, I noticed that most of the cheese had escaped out the back and onto my plate. Obviously I’d been holding it the wrong way round and this was disappointing because it wasn’t so much of a juicy Lucy anymore.

I scooped up the cheese with some of my tots and that was rather nice. Cheesy, crunchy potatoes. I had basically made my own Wotsits!

The burger however, suffered a bit with the loss of the cheese, becoming rather dry. This is one of the main reasons I always prefer a cheeseburger to a hamburger, unless there’s considerable sauce of some sort to pick up the slack.

Overall, a decent burger, but far too big and I couldn’t finish. Cold Beers and Cheeseburgers is an excellent place though – open to the front as many places here are, you can enjoy a choice of some great beers while tucking into your burger in the sun. 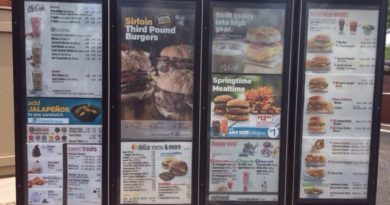 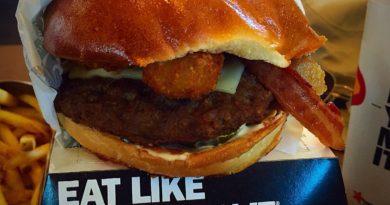 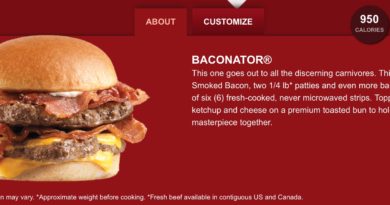