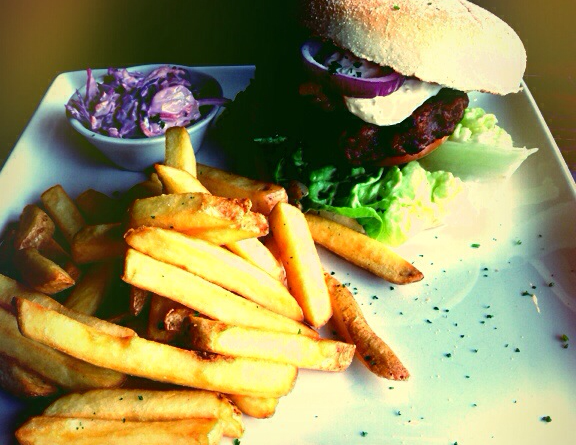 Our man Andrew is a once a week sort of guy. He likes his burgers and reviews the same – once a week!

So it was no surprise when this latest guest review popped into the Burger Lad® inbox and this time we got to see the Mexican Fajita Burger courtesy of the Specials Menu from Chiquito Restaurant Bar & Mexican Grill.

Everybody knows Chiquito. It’s the “Mexican” place beside the cinema in whichever town you live. I’ve certainly had plenty of fajitas, burritos, enchiladas and the like here, and I’m not alone in that.

But this is Burger Lad®, not his Mexican cousin, Chimichanga Chap, so amigos, burger it is.

Chiquito is owned by the same company that owns Frankie and Benny’s, so I’m not surprised to see my table awash with menus. Breakfast, Main, Specials, Cocktails, Desserts.

But I already know what I’m having. It caught my eye on the website on the specials menu – The Mexican Fajita Burger. A round £10. None of the 95 or 99p stuff here. When in Mexico, eh. So that’s the best of both worlds.

I look around and see typical Chiquito stuff. Lots of aged wood, desert plants and sombreros. Just in case I thought I was still in Britain.

It’s a lovely sunny day outside. It could almost be Mexico I suppose. But it isn’t. It was St George’s Day recently, so there are a few cars with St George’s crosses fluttering from the windows.

We all know what it is without the caption. It looks awful and spoils one of the world’s oldest flags. If you are one of these people, please get a proper flag in time for the World Cup!

Anyway, back in Mexico I put my order in and wonder if it’s going to taste more like a burger or a fajita.

I wasn’t asked how I’d like it cooked. I know I say that every time but it really is one of the little touches that distinguish great burgers.

My fajita burger arrives on a neat square plate, with its fries and slaw separate. It’s held together with a spike, and has considerable sauce – all the usual fajita things – salsa, sour cream, guacamole. A very generous piece of fresh lettuce, some nice fried onions and a thick knobbly chunk of beef.

The fries are quite thick, with plenty skin and nicely seasoned. But they aren’t quite as crispy as I’d like. The slaw is lovely though.

So, I take the spike out and, yes you’ve guessed it, the fresh tomato lurking at the bottom. My first bite and loads of stuff squirts out. I also notice raw red onions which I hadn’t before. Great.

This is extremely difficult to eat but quite fun. The bun, toasted on the inside, is rather soft and starts crumbling after three bites. This allows all the various sauces to come through and make a mess of my fingers. The fun is wearing thin.

The bun degrades further with each bite until it becomes impossible to pick it all up together. I have to head for the fork and knife, which is a great shame. A more robust bun holding its contents in better would definitely improve this.

There are a lot of ingredients to this burger which is not a bad thing. And a lot of sauce. Also not a bad thing. But having to finish it off with cutlery because it falls apart somehow just isn’t good burgery.

I was properly full after finishing it. It’s very generous and there was a fantastic lingering heat in my mouth.

It’s a nice burger. The crossover aspect is fun. I probably wouldn’t have it again, though. Partly because of the bun crumble, but more so because I like the Mexicana stuff on the menu more.

So, until next time, adios amigos, and don’t forget those flags.

Massive thanks to Andrew again for another insight into High Street burgers available in the UK.

April was a bumper month on your favourite burger review website and May is already shaping up to be bigger and better! 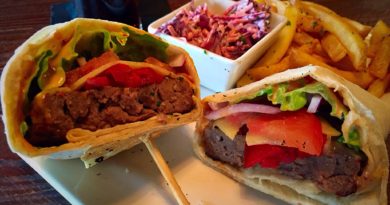