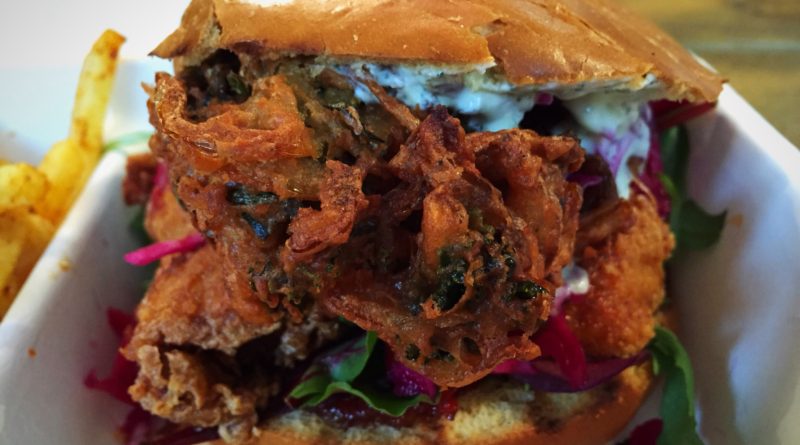 Our legendary Chicken 65 on a toasted brioche bun, with salad, chilli & ginger Jam, mint and coriander raita, topped with our homemade kale and onion bhajia!!!

Back to The Kitchens in Manchester’s Spinningfields jungle, and the final one of the six traders for me to visit.

Chaat Cart is Indian street food with all the colours and smells you’d imagine. From its beginnings as a vegetarian vendor, Chaat Cart seems to have seen the light and started doing chicken, and I think we can all be glad of it.

Nothing wrong with vegetables. But they belong on, or at the side of, meat. And with a new found love of chicken, CC has gone and developed a burger based on their “legendary” fried chicken, a whole bunch of mouthwatering Indian sauces and toppings put into a brioche bun.

Chicken 65 is apparently a street food Classic in India, crispy chicken made with cornflour. So that forms the basis of this new creation. I’ve seen pictures on Twitter and it does look amazing.

It’s not actually my first curry-ish burger – that was at Baba G’s – but the couple that run Chaat Cart certainly smile more!

So, there’s chilli, ginger, coriander, mint, kale and onion on this, as well as apparently super fried chicken, served with “gunpowder fries”, all at the wallet-friendly price of £5.

First up, the gunpowder fries. These aren’t described, but sound explosive. A sensible portion of fries very liberally seasoned with visible spices. Visible and noticeable. I’d probably have preferred them to be a little more crispy but the spices all over the, created a unique experience and I immediately thought they were well-named.

The burger seemed a little different from initial promo pics, with the onion bhaji on the inside instead of the outside of the bun. My preference actually, to have the contents of a burger properly contained, but I wonder why it was changed.

I took the bhaji out anyway and ate it. These things are inherently dry wherever you get them, but this one was miles better than the horrid little round things you get at your local takeaway. Really enjoyable.

Onto the burger then, and it’s basically two pieces of fried chicken in a bun with loads of colour. And flavour. Wow!

The chicken itself was very mild on its own. Nice and juicy inside, and gloriously crispy on the outside, but the main burst of flavour comes from the sauces.

The stand-out flavour I must say is the chilli and ginger jam, which gives it a marvellous hot, sweet, un-put-downable kick. It’s not overly not though, but it is tempered by the mint and coriander raita, which cools things down.

Obviously this is a cheeseless burger, but lubrication isn’t a concern. There’s absolutely plenty of it going on, and the red kale which is liberally scattered within, adds colour, working with the greens to give it an exotic look as well as satisfying crunch.

And satisfying was very much the theme here – satisfying taste, satisfying textured, satisfying price. If this is how good their stuff is inside a bun, I need to try what they’ve got without a bun.

But in the meantime, for a lunchtime fiver that puts a smile on your face, I’d thoroughly recommend this one.