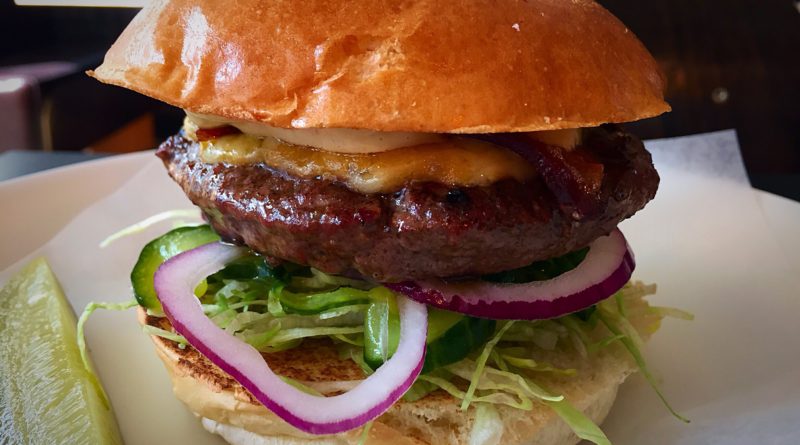 Our new special is a best-of-British take on a classic bacon cheeseburger: a 6oz hamburger topped with vintage Cheddar rarebit, dry cure bacon and pickled cucumber, with a tangy mustard mayonnaise.

I’m at Byron’s newest branch, in Manchester’s Corn Exchange, to try the latest special – the Run Rarebit Run. This has proved a difficult morning, drawing upon every ounce of patience and perseverance.

Firstly, the Corn Exchange’s central atrium is still being finished, so although some of the restaurants, including Byron, are open for business, it required walking around the outside to find them, and navigating further engineering works as a result of the Metrolink.

However, find it I did, only to discover it wasn’t actually open yet because a window was being replaced. The trouble with these modern floor to ceiling Windows is that it’s anything but a small job to replace them if they are broken.

Anyway, all this walking around gave me time to ponder the issue of independent restaurants vs. chains. Byron is undoubtedly one of the latter, while the Corn Exchange itself is a bastion of chain restaurants.

It’s not going to be terribly popular with indies, and it may well be that the rates are so high that most indies would be precluded. But on the flipside, it’s a vast improvement on the dismal semi-empty retail block the Triangle, as it was formerly known.

Byron is clearly a chain, but that wasn’t always the case. It began, as so many do, with a single branch, in this case Kensington, and grew from there.

Growth wasn’t entirely organic though. Initially a decent enough short-menu London-only affair, it was injected with some serious capital before taking on one of Britain’s foremost burger chefs, and daring to do what most London companies don’t bother with – venturing outside the M25.

Now, most of its branches are still in London, but looking at recent openings, it’s a reasonable stab to say that will change.

I’m in Manchester’s third Byron after all. Anyway, my original point was that a lot of the restaurants we consider to be chains, did begin as independents with single branches, including the epitome of the chain brand – McDonald’s.

But with Byron, I’d argue the key to its success now isn’t the vision of its founder, or the deep pockets of its backers, or its marketing machine, it is burger god Fred Smith, whose specials in particular have transformed an ordinary London burger chain into a national cause for excitement.

Mr Smith doesn’t make bad burgers. They range from very good to jaw-dropping and I’m here to find out which end of the scale best suits the current rarebit special.

On paper it is a best of British – pulling in ingredients from all over the United Kingdom. Beef from Scotland, mustard from England, rarebit of course is Welsh and I’m just going to hope the onions and lettuce were grown in Northern Ireland. At any rate, each of these ingredients just wouldn’t be as good if you ate them separately.

It’s essentially a bacon cheeseburger with some twists, chief amongst which is the fact that the cheese is in fact vintage cheddar rarebit, and that is accompanied by bacon, mustard Mayo, pickled cucumber, red onion and lettuce, along with Byron’s signature 6ox patty. It’s an understatement to say I’m looking forward to this.

As I wait for my burger, my observations are as follows: this is a nice branch, well-appointed and moving away from the slightly tired pseudo-industrial non-decor of older branches; incredibly friendly and welcoming staff.

On the downside, no Wi-Fi and woeful loud music of the type that I believe is called “RnB” so I use “music” in its loosest sense. At midday on a Tuesday, with one customer, it wasn’t appropriate.

I turned to the blurb on the Run Rarebit Run, setting out Chef Fred’s methodology to some extent. Vintage cheddar blended with pale ale, Worcester sauce, mustard and hot sauce.

Picking it up, I got the strong savoury tones in my nose first, even before my mouth made contact, and in that moment a piece of sauce-soaked bacon slid out the back. This is a slippery customer.

The rarebit is the stand-out taste here, giving a very tangy, slightly sour flavour to the build, which worked well with the intense savoury hit of the bacon and the sharp ping of the pickled cucumber and red onions, both of which were pretty clever inclusions.

Although all the sauce and cheese was on top of the patty, somehow the bottom bun succumbed to it and crumbled. Not entirely – it held on heroically until the end, meaning I didn’t need to turn it upside down to finish.

The pickled cucumber, with its crunch, kept the texture interesting, while the range of flavours kept by taste buds on their metaphorical toes. As I said, chief amongst that was the rarebit.

The patty is Byron’s signature and we’ve covered that in other reviews before, but just as a reminder, it’s a well-sized 6oz, cooked medium by default (although of course you can choose otherwise if you prefer), nicely seasoned and a good, loose blend. If I had to guess, I’d say a 70/30 with at least some chuck. It’s good and well-developed.

Is this the best Byron special ever? No. It’s a very good and extremely enjoyable burger though, and well worth having before it is subsequently replaced by the next delight from Fred’s kitchen. 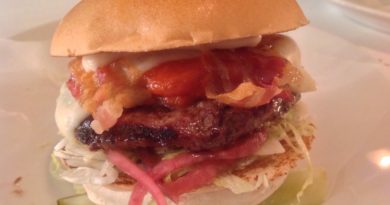 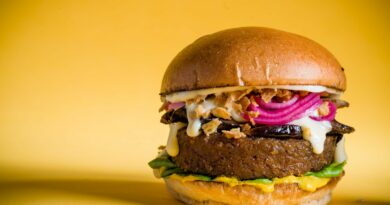 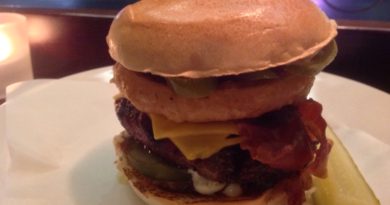