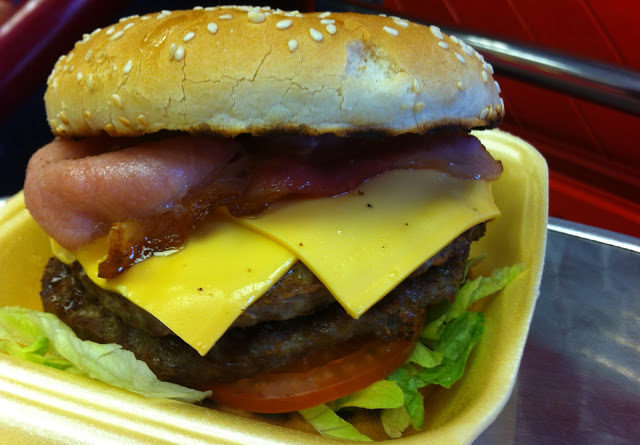 Burger Star, famous for great food and superb service. All products are ‘cooked to order’. Burger Star the Best by Far …!

It was a tough decision to go to Burger Star in Cheltenham today. Not because of the time it would take to get there and back or the excessive greed – it was due to the number of road works in and around the Bath Road area and the subsequent mission.

Armed with my trusty notepad and pen we zoomed off down backstreets and areas of Cheltenham I have never seen before and thanks to some stunt driving arrived in good time and got a premium parking space.

Many, many years ago there was a Burger Star in Malvern (my home town) but with the arrival of McDonald’s in the very late 90’s (possibly 2000) the subsequent outcome was Burger Star becoming a Dominos Pizza.

There also used to be one in Tewkesbury which has since become some other fast food establishment – the remaining franchises are in Gloucester, Stroud and Ross-on-Wye.

So… having not had a Burger Star in 12+ years how would it hold up?

On the counter there is a wide selection of self service sauces and relishes allowing you to make your own creations.

I noted the usual suspects, such as ketchup and mayonnaise but also blue cheese dressing, sliced gherkins and an old friend… jalapenos.

What I had forgotten is when you place your order it is announced to the kitchen via a tannoy system allowing anyone else within earshot to hear your vices. No Mega Star this time then…

All products are cooked fresh to order and it took about 5 minutes for the burgers to arrive from the kitchen.

There are two tables in Burger Star but no chairs, so it was standing room only, but for a quick jaunt at lunch this wasn’t a problem. I also noticed a lack of bins in the dining area.

Now this had a ‘proper’ burger look and feel to it (none of your fancy dans here) and the smell and taste reminded me of a traditional burger van.

The patties in the burger had a nice char-grilled taste but the meat did feel slightly processed and I assume these are not made on site. I could be wrong.

The two generous cheese slices had melted slightly and were a welcome addition to the burger. The bacon was cooked just as I like it but I couldn’t really distinguish its individual flavour. There was a small amount of grease from the burger but nothing to complain about and totally expected considering the ingredients. 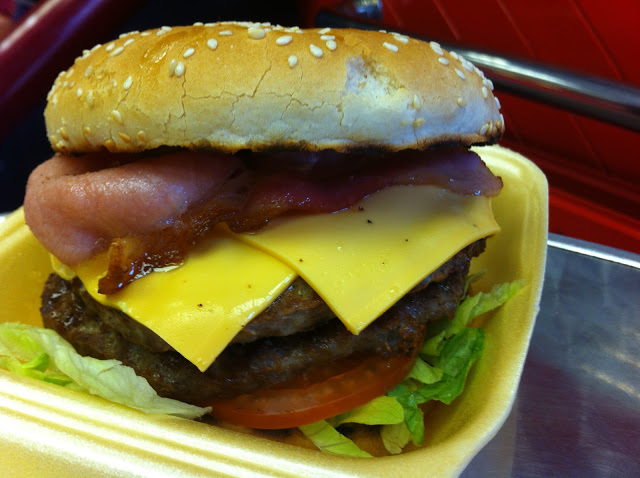 What I really liked about the overall texture and taste to this burger was the perfectly toasted, traditional sesame seed bun and the fresh onion. This had a strong taste but was not unpleasant and the shredded lettuce could have been picked this morning it was that fresh.

I passed on the wide selection of condiments although I did add some of the sliced gherkins to my burger and these were lovely and crunchy – next time I’d be tempted by the jalapenos too! 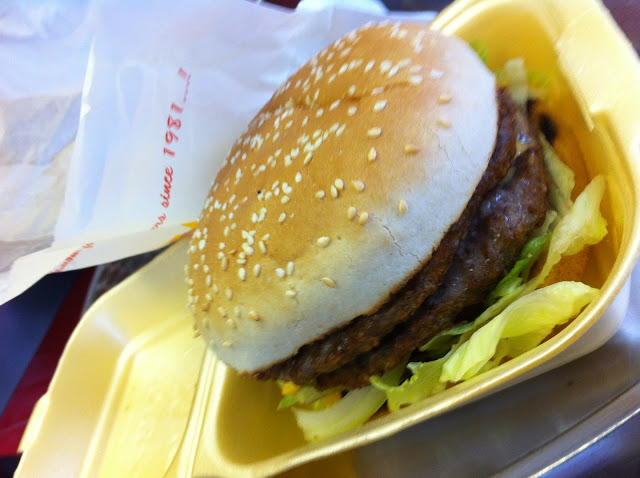 Overall, this burger was a combative, meaty opponent that may be too much for a lesser man. Personally I’d not eat anything bigger than this and believe a Mega Star would be too much meat but might appeal to others looking for a quick burger fix.

I get a feeling that nostalgia plays a big part in people’s opinions of Burger Star as although nice I wouldn’t rave on about it.

I imagine a lot of business is generated from the after pub crowd and can see why it would be regarded in that situation as it is an enjoyable burger.

You could say that the Giant Star with Bacon and Cheese is the ‘best by far’ but probably after a number of drinks from the bar.