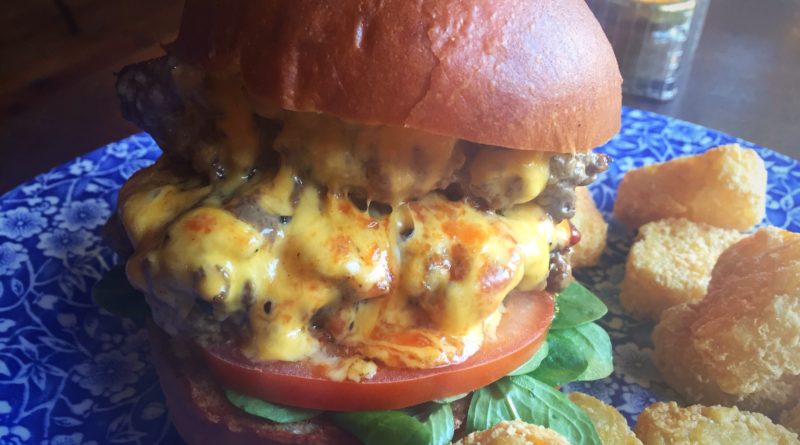 Burger Craft is a residency of sorts in a few London pubs, selling a number of burgers and associated dishes as well as their signature Juicy Bastard.

I haven’t traditionally been the biggest fan of pub burgers, but there are definitely some that are genuinely eye-opening and this is one of them.

Initially I must admit I only wanted to review this one so I could justifiably write the word “Bastard” lots of times and present BurgerLad with the dilemma of whether or not to use asterisks. I can be mischievous like that.

But I did read up on them and contacted co-owner Ben who said his business partner Chris, who is the head chef and developed the menu, would come in for a chat. Ben’s company PubLove runs the pubs in which Burger Craft is located. That arranged, I headed to the Exmouth Arms near Euston for the second time.

The first time I went, neither Ben nor Chris was there and I was told I couldn’t have a burger until 12 noon and it was about 10.30am. This is wrong – in Ben’s words “we will do you a Juicy Bastard any time you want”. Burgers in the morning – what champions!

So the Juicy Bastard is a substantial double cheeseburger with lettuce, tomato and BBQ sauce. Simple, but effective. And big, and juicy, and tasty.

It comes with a choice of fries or mini hash browns and I chose the latter.

Huge amounts of beef and very generous helpings of cheese contributed to the juicy messiness of this and when I pressed down, the meat juice was apparent. Not quite apparent enough though, for a medium-pink, and when I deconstructed my patties, the pink wasn’t exactly in abundance. It was overcooked, not enough to dry out all the juices, but enough to to brown the pink.

However, just at that moment, Chris ran in and after brief pleasantries, he immediately noticed the meat was overcooked.

I absolutely love to see chefs taking so much pride in, and knowing their product so well that they can instantly spot when it’s not right. It was taken away and a new one brought out. The second one was spot on, as we discovered when opening up the patty. Genuinely very juicy and worthy of the name.

What you have here is outstanding beef, loads of mess and simple toppings. Personally I could do without the tomato, but considerable thought and experimenting went into choosing the right type, as Chris explained. But other than that I thoroughly enjoyed it.

The story of Burger Craft is essentially a desire to elevate the flagging pub burger scene by producing an outstanding quality product.

Chris said they often here that people are genuinely surprised at how good it is, and my voice probably has to be added to that chorus. You simply wouldn’t expect it to be this good in this location, but the fact of the matter is that it is as tasty as many of the big name burger specialist places.

Burger Craft is part of Pub Love and the idea began with Ben and Chris looking for a concept. After toying with the idea of pizza for a while, they settled on burgers. It’s a relative newcomer to the scene, beginning two years ago at the Green Man near Edgware Road with the Juicy Bastard and, with time in the development kitchen, Chris added more and more to the menu.

Unsurprisingly, with the quality of the Juicy Bastard, the concept was successful from the start, and more locations were added. Two more sites are being looked at, and they do a lot of sales via Deliveroo.

Like all good burger places, a lot of time and effort went into selecting the right products.

The meat of course is the most important, but there’s the buns – they didn’t just pick one at a good price and make do, they tried loads of options before deciding on the one they use.

There was also a two-and-a-half hour debate on tomatoes alone, and the choice of plates took considerable trial and error. Chris is an infectiously enthusiastic Irishman, and in the time we spent chatting I could see him brimming with pride at his creation. And rightly so.

But there’s no resting on laurels here. The development is ongoing, and in fact the idea is that limited specials will begin next month, giving the 20 chefs working under Chris a chance to show off their talents.

As I’ve heard from other founders of successful burger businesses, it is incredibly difficult to hand over the development reigns to others, so I suspect Chris will continue to have a huge involvement in new products as long as possible.

Indeed, he personally recruits and trains all new chefs himself. The Exmouth Arms is the best performing site and unsurprisingly the Juicy Bastard is the biggest seller.

So many different versions of each burger were tried until the right combination and methodology was reached. We even spoke at quite some length about the merits of the different types of lettuce, rocket and so on.

Although growing strongly, this is still a small independent business with exciting growth plans, vision and most importantly a fantastic product. It is also a business refusing to sit still. With the success of Burger Craft ensured, Chris is now looking at developing Chicago-style pizza pies (still a remarkable rarity in Britain, for a number of reasons but not least due to the equipment required).

I absolutely loved the Juicy Bastard, and like everyone else, was properly surprised at how good a pub burger can be with the right amount of effort. If you are anywhere near a Pub Love location, there is simply no excuse for making do with generic chain pub burgers anymore. The Juicy Bastard hasn’t just raised the bar, it’s taken the bar and lobbed it into space.

The new benchmark for pub burgers.