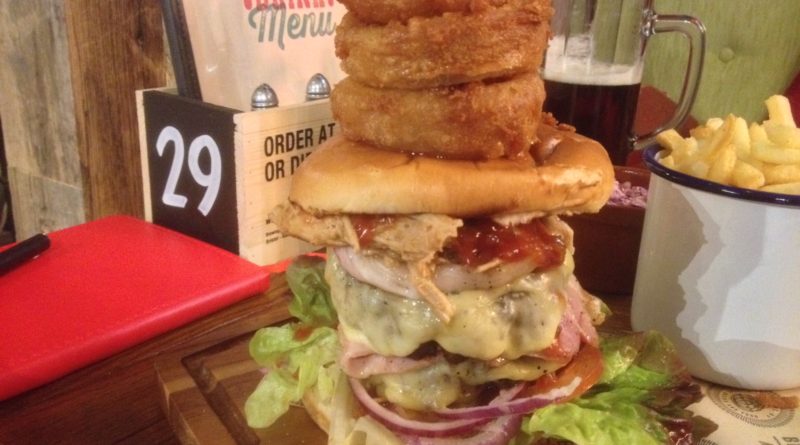 Brewhouse & Kitchen is a relatively small chain, with 11 locations throughout the UK and an additional three venues set to open in 2016.

The Cheltenham kitchen/bar/restaurant/microbrewery opened in late May, in one of the prime units inside the newly renamed Brewery Quarter.

There was one burger that just HAD to be reviewed and that was The Ridiculous Burger. More on that to follow…

We are a small, independent pub group and we’re passionate about many things: fanatical about craft beer, obsessed about finding interesting bottled beers to add to our vast range, worship great wines and excited about teaming this fantastic collection of drinks to our offering of freshly-cooked pub classics – all to give you a tantalising pub experience with a modern twist.

As you can gather from the above and their website, B&K is very much focused on craft beer and also offer a Brewery Experience Day – a 7 hour session which starts with breakfast, an introduction to the brewery and then a two-phase hands-on exercise of brewing your own beer (lunch is sandwiched in-between).

Of course, you’re going to need some food to soak up all that quality craft beer!

Their menu has a wide-selection of fairly common favourites, including a selection of starters, steak, pies, fish & chips, BBQ ribs and the eyebrow raising Whole Beer Can Chicken (suitable for 2-4 people).

Alongside the main menu is the respectfully-sized Burgers & Dogs menu which was obviously the reason for our visit!

As this brand is so passionate about its craft beer, each menu item has a suggested pairing for an ale or beer to go with your menu choice and the website also has a handy beer & food pairing chart.

It all looks good on paper (the website) so we arrived at the Cheltenham Brewhouse & Kitchen full of optimism.

Now The Ridiculous Burger had firmly hit our radar when a Gloucestershire-based “lifestyle-type” website/social media account proclaimed it to be the “best burger in Gloucestershire”.

They also talked about it containing two 21oz beef patties (I think it’s very much two 21-day aged patties) so I soon dismissed this claim, instead focusing on documenting our account and forming our own opinion.

Inside B&K it’s really rather swanky with the standard exposed ventilation system and an eclectic mixture of lighting including the funky light-filled beer bottles which hang down from the ceiling in-front of the bar.

You’re looking around the decent-sized interior trying to take it all in. For a Wednesday evening I also couldn’t believe how incredibly packed it was.

We saw at least one group of people come in and then leave immediately as they hadn’t booked so clearly Cheltenham’s newest bar and eatery is extremely popular. And looking around I can see why…

B&K Cheltenham has got a really good vibe about the place.

There’s a mixture of friendly chatter, background music which isn’t too loud and it feels like the perfect destination for a couple of post-work beers on a Friday afternoon/evening.

A very social place, with a mixture of enticing smells coming from the kitchen… slightly “hipster” but not overbearingly so.

You have two options for ordering food; order at the bar or direct from your table, which should suit those who think that table service is a given in the 21st century.

I opted to pair the Ridiculous Burger with a pint of Brillig (4.6%) which is brewed on the premises in their microbrewery. Bizarrely on one menu this was priced at £3.80 but on another menu it was £4.10 and this pattern continued for a number of beverages.

When ordering, we were asked if we wanted to “Load ‘em up” (add extra toppings to our burgers), but surprisingly not given the option of ordering starters or sides which again was a bit odd because I would expect staff to encourage diners to spend more money.

Structurally this is HUGE… and I witnessed a number of heads turning as it arrived on our table with a thud.

I’m not a fan of “challenge” sized burgers nor am I one to shy away from them (Ultimate Burger, Bad Boy and Towering Inferno spring to mind).

But this was B-I-G – it is actually impossible to get a bite from crown to heel so I cut it in half to give me a better chance and to get that cross-section shot.

This was a bad idea as soon after that it started to become a bit of a mess, things were getting a bit ridiculous…

The steak knife holding everything together has the three (crispy and tasty) onion rings around the handle which is probably a good idea as if they had been inside the bun the height would have been even greater.

It did start to fall apart over the wooden board it was served on but no matter, it was still fun to eat.

Some people might use a knife and fork at this stage. Not me. Although I did require a more than average number of napkins while devouring this beast. I felt like Rick Moranis – this wasn’t ridiculous… this was ludicrous!

How did it taste?

It’s fairly decent. The beef is cooked well done and is fairly meaty. The flavours are decent enough, slightly seasoned with visible herbs in the blend.

Texture-wise it doesn’t quite “feel right”. Almost too tightly packed and nowhere near in the same league as places such as Solita and Almost Famous.

But you do have to remember that this isn’t a dedicated burger joint. It’s a (very good) bar/brewhouse primarily that serves food, and burgers are just one element of the menu.

The bottom brioche didn’t really stand a chance with the stack of meat on top of it so that started to disintegrate fairly quickly.

I like my bacon “flabby” as opposed to “crispy” so you’ll be disappointed if you prefer the latter. It didn’t really contribute much in terms of flavour either and there was a significant amount of white fat leftover. It might be an idea to switch the bacon on the build to crispy bacon as it would work much better with the pulled pork. Everything was too soft, it needed that crispiness to offset against the pork.

The pulled pork was fairly respectable though.

There wasn’t a massive amount on-board (with two beef patties this is a good thing!) and it was quite sweet with a distinct pork flavour.

Unfortunately, I don’t know what it was, but I bit into a small, dark morsel of something and the tiny piece of whatever it was had been incinerated and in one instant destroyed my palate. I needed a swig of beer and a handful of BBQ sauce coated fries to get rid of that taste – it gave a new meaning to burnt ends!

There’s plenty of salad which is fresh, probably a bit too much lettuce but the red onion is definitely required to cut through this meat-feast.

As you know, I’ll leave fresh tomato thank you and maybe a swapsie for pickles would be my option if I ever want to get ridiculous again.

The relish is pretty good, quite fresh and I can’t conclude if it is bought in or made on the premises. I wouldn’t like to speculate either way. One thing is for certain, it definitely made a change to the oh-so-common default mayo you get on most burgers.

The cheese is there, melted right on the money and it tries to hold everything together but doesn’t succeed – again probably more attributed to me cutting the giant stack in half.

Overall, it’s a fairly respectable burger but calling it the best burger in Gloucestershire is a bit far-fetched. To the uninitiated, it may appear to be the best but if you carefully deconstruct the build you’ll uncover a few faults.

In my opinion, flecks of green herbs have no place in a burger – this is not a Lincolnshire sausage after all. Again just my viewpoint.

I know the ingredients are probably sourced from a centralised location but I’d certainly suggest looking at using something like Martin’s Meats superb Longhorn beef for their patties.

Make no mistake though, Brewhouse & Kitchen is a fantastic destination and if I was scoring the place on décor, atmosphere, selection of beers, staff friendliness and overall ambience and experience I would be scoring it in the 90 region.

But this is a burger review and although decent it has a few issues. A slight tweak here and there could turn a decent burger into a great burger but again this is just my stance.

I’d like to add that we did not pay anything this evening and would like to thank the team at B&K for having us especially after I pretty much invited myself.

We would certainly return as it really is recommended and a great place for a few drinks and a catch-up with friends.

Is this the best burger in Gloucestershire? Definitely not.

Places such as Real Burger and The Tavern (currently closed) certainly deliver a more enjoyable and better beef patty.

It’s definitely the best burger in The Brewery Quarter and if you’re talking wow factor and/or sheer volume of food then yes maybe it is. 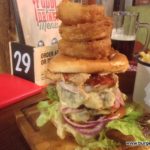