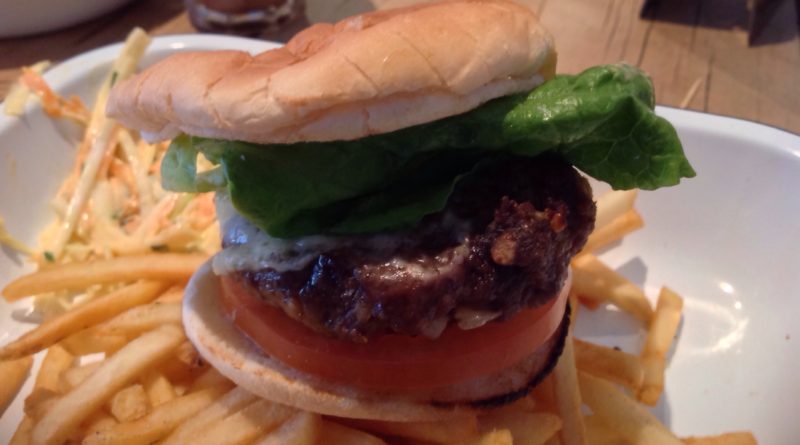 We thought our old burger was pretty good, until we made this one. Homemade West Country beef burger topped with melted mature cheddar, bacon jam, pickled cucumber, leaves and chipotle mayo. Served with chips and homemade slaw.

Now we’re no strangers to Worcester and have previously sampled the Wild Boar burger at the Old Rec and the Salt Beef burger from the Dragon Inn.

We’ve even had a self-proclaimed ‘Ultimate Burger’ from the Rising Sun near Cheltenham, so how would the BTP version compare?

Most people have a leisurely flick through the papers on a Sunday morning. Not at Burger Lad® HQ – instead we trawl menus looking for a Sunday jaunt and as we had already decided on Worcester, Boston Tea Party was thrown into the mix.

Upon reading the description above I was sold on the idea and after a two-hour play session at Little Acorns (with the kids) we parked up in CrownGate (£1 all day on a Sunday) and descended on BTP.

The majority of Cafes in the Boston family are located in Bristol with a Cheltenham premises opening soon. The Worcester one we were visiting today was a public house in its former incarnation and is in a prime location near to the High Street. The area hosts the daily market and is placed conveniently for the aforementioned CrownGate multi-storey car park and shopping centre.

I liked it inside Boston Tea Party which has had a good restoration job. The décor is firmly in the modern tea room look with rustic tables and seating, cool low hanging lights and gallery seating upstairs. It seemed fairly family friendly despite one or two glances from the cliental but again you get used to it with the Kondiment Kids in tow.

It took an eternity to get served as the two people behind the counter grappled with coffees and smoothies made from scratch. I grabbed our drinks and took the tray and numbered placard back to our table with a little bit of excitement at the thought of this latest 21st century burger adventure. The Ultimate Burger is part of an autumn update of the menu which includes highlights such as a Reuben Sandwich, Slow Roast Pulled Pork Bun and the tempting sounding, available all day ‘The Boss’ breakfast.

They say you eat with your eyes and to be honest when I saw this I thought it was far from ultimate. But as I was reminded later in the day it depends on your definition of ultimate. After all, we were sat in what is basically a coffeehouse that also serves food and is not some eating challenge, steak house style establishment. With that enlightenment I had yet another Homer Simpson quote in my mind:

“I thought this was supposed to be a steak house, not a little girly, underpantsy, pink doily, tea party place!”

So… let’s take this burger for a taste drive and discover if it has the BTP (Best Tasting Patty)?

Bun – oh the bun… it looked pretty sad as if it has been bullied by its beef interior. That or it had been sat on! It held together admirably throughout and was fresh enough with a touch of toasting but on this occasion I thought it was average at best.

Beef burger – very good! The homemade West Country patty was excellent quality and full of flavour and today it was cooked well done. It wasn’t greasy in the slightest but was moist and provided a fresh and proper meaty mouthful. Impressive springs to mind!

Cheese – the melted mature cheddar was strong and sweet and oozed over its beefy buddy. I’ve had a lot of burgers where the cheese is not distinct but you certainly know the cheddar is on-board the Ultimate Burger from Boston.

Salad – there was a great big piece of fresh, green lettuce and the tomato slice was huge and cut thickly. Alas, long time readers and fans alike know that this particular salad item and I have never got on and guiltily I removed it from the burger. The really disappointing thing to report back is that there was no pickled cucumber at all and I believe this would have taken it to another dimension. Shame.

Condiments – Bacon jam and chipotle mayo!? Yeah I was excited too! The bacon jam added further sweetness to the cheddar and I was expecting a slight kick from the mayo but this was more subtle than spicy. They
both complimented the beef though and made for a pleasant eating experience.

The burger came with a massive sized side of fries which were hot, crispy and quite salty. I did ask for some of my favourite BBQ sauce (as ketchup and HP bottles are on the table) but alas they did not have any. This was all served on a metal baking tray which looked like it belonged on Cub camp! A novel idea and the first time I’ve seen this – it certainly bought back memories of 1st Malvern Wells and made me smile.

Overall I was fairly impressed with the burger on offer from Boston Tea Party. It promised quite a lot in the description and today I don’t think it truly delivered what it said on the tin. At £7.75 it is very good value and honestly that beef burger really was a good quality, tasty bite but all the components together gave you a strong, sweet flavour to savour.

Would I have the burger again? Probably not but I would recommend it and I will definitely go back and try something else next time I am passing. Would I call it the ‘Ultimate Burger’? Definitely not. I think the description should be something like “locally sourced, organic, fresh, homemade quality burger” but then I guess that isn’t quite as catching!

Next time, please remember to include my pickled cucumber – I was really looking forward to this element! I had a bite of the Reuben which had a very strong, rich taste but I am informed that it definitely did not have Swiss on this occasion.

I know I said the Monster Mac was our last review in 2013 but I needed my burger fix today and with 48 hours of 2013 remaining will this be the last? I hope you have enjoyed the tale of Burger Lad® and the Boston Tea Party Ultimate Burger. We’ll leave you with one last look and thanks again for reading!