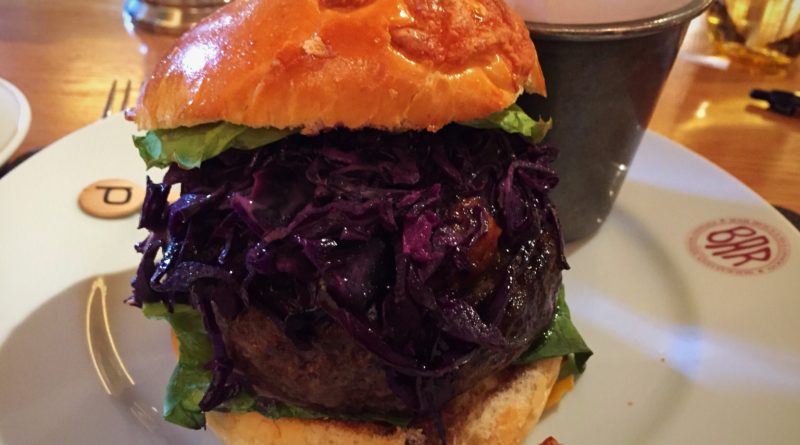 OK, there’s no pretending that this is a normal burger. At this price, it’s a very expensive burger, no matter how good or how bad it turns out to be, and for that reason alone, I’ll only be having it the once.

That said, the burgers at Boulud, Daniel Boulud’s outpost in the Mandarin Oriental hotel, are generally considered highly by London-only reviewers, so I’m looking forward to it.

When I tell you it’s in Knightsbridge, you can understand the price and let’s not pretend it’s all about quality. Next door, in One Hyde Park, there’s a flat that sold for £100million.

In a previous life, this is the kind of place I would have dressed up for. Today it’s just about the burger. Bring on the Piggie.

The place is full and thankfully I reserved. It’s a real mix – some hoodies and sports shoes, t-shirts, some tie-less suits and Made-In-Chelsea haircuts. Even slippers instead of grown up shoes. Maybe that’s how the Kings Road Massiv dresses these days, who cares.

Lots of American accents, none particularly quiet. But other than that, immaculate service as you’d expect.

My beer (£4.50 for just half a pint) was brought on a tray without a smile. The feeling was mostly positive though, and the majority of any minor downsides thus far were due to the clientele rather than the venue.

But that aside, I really was looking forward to my burger with pork, spicy mayo, and cabbage. No cheese on this one (it’s a £1 supplement on the Yankee burger at £17) although it does come in a cheddar bun.

The choice of cabbage was also intriguing me as lettuce usually does nothing to the flavour and I wanted to see how the stronger cabbage worked – perhaps other places can take note.

When it arrived, on a plate with a little tin of fries and some ketchup, I immediately noticed two things. No smile again, and the thickness of the patty.

I was asked how I wanted it cooked and in reply I asked for the recommendation, which was med-rare so that’s what I chose. So let’s see how it stood up.

Well, overall it was a solid, even very good burger, but with some reservations which I will come to. I don’t entirely understand why it makes so many top-whatever lists in London and obviously I’m going to have to explain myself.

Encasing the burger you have a cheese bun – you’ve seen them in Tesco and the like – a roll with cheese baked into the top – looks great, and this one was decent but firstly I couldn’t taste the cheese on it and secondly the bottom bun did suffer a degree of crumble. For £19 I don’t think it is unreasonable to expect the bread to make it to the end.

Inside, we have both red cabbage and lettuce. I don’t think the lettuce was actually listed on the description, and other than sitting there looking all green and lovely, it did nothing for the taste.

The cabbage, on the other hand, shredded red cabbage, was really good. Not only did it give a mild earthy taste in the background of the flavour repertoire, but it also gave the satisfying crunch that is often the forte of bacon.

And that brief mention of my favoured pig product brings me to the BBQ pork in this burger. Clearly it’s a key ingredient because it gives the burger its name. But unfortunately it was probably the main cause of disappointment.

BBQ pork is usually so sweet, so strong that it can often override other flavours in a burger. And while that is certainly a problem, bizarrely it was the complete opposite here.

I couldn’t taste it at all. There wasn’t a lot of it, and perhaps the lack of generosity was the problem. Or perhaps it was the preparation. I really don’t know. All I know is that it might as well have not been there at all. Such a shame.

Before we get to the beef, there was the jalapeño mayo – always a winner in any book and no exception here. It lubricates, which is extremely important here with the lack of cheese, but also gives a lovely spicy hit.

In this burger, this is incredibly welcome because it’s the only lasting flavour in the thing.

And finally, the beef – that thick patty cooked medium rare. Yes it was good. Not fantastic, but good. It’s a coarse mix, gently seasoned and (as you’d expect and probably demand in this place) cooked perfectly.

You know, if I’d been able to choose this beef patty on its own, with some jalapeño mayo, I’d probably be impressed.

It’s a good burger but it really ought to be a great one that lives up to its price and its esteem amongst London foodies, but it just isn’t.

– would it hurt the staff to smile?

– I don’t feel the price is justified for any reason other than the postcode.