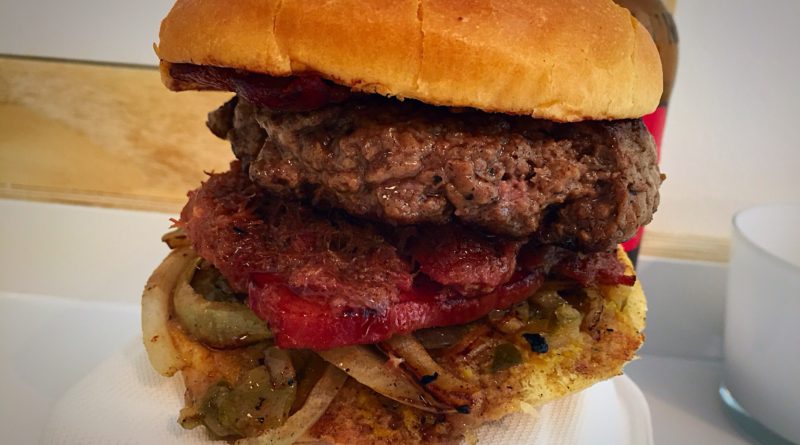 Born in Summer 2014 Bangers and Bacon was created by the award-winning team behind Bobby’s Bangers and flamboyant creator of Flavours Found with a street food offering unlike no other.

The Kitchens in Manchester’s shiny Spinningfields development is clearly designed to bring a bit of the “street” to a huge corporate facade. We have to overlook the fact it’s sponsored by one of the country’s biggest developers.

But good for them. It’s a great idea. Over a period of time, six traders have the opportunity to sell from a prime bricks and mortar location, and at the end of the period, one of them gets to stay.

I must say, the competition aspect is the one part I dislike. You half-expect to see Simon Cowell or Duncan Bannatyne in the corner, making notes.

It’s only been open a week or so and there’s clearly a huge amount of camaraderie between the traders. How long that lasts, with the competition in mind, is anyone’s guess.

Now, I’m not a developer, nor a chef, nor am I Simon Cowell, but I’d prefer to see the concept used permanently as a multiple-trader outlet.

Perhaps rotating the traders on a monthly basis, one at a time, which would give each trader six months each, and allow a new one every month. One in, one out.

Anyway, that’s the concept. The presentation is incredibly slick. It’s a bit like the amazing Guerrilla Eats but with much deeper pockets. It’s slick and shiny. Obviously I’m here for a burger, but I could just as easily enjoy fish and chips, Indian food or others.

However, this isn’t a review of the Kitchens – for that, see any number of Manchester general food blogs and newspaper articles. This is a burger review.

The burger in question is the Mutha Porker from piggy legends Bangers & Bacon.

They’ve eluded me thus far, such is the downside of street food, a problem that the Kitchens addresses, albeit temporarily (well temporarily for five of the traders anyway).

Bangers and Bacon isn’t a burger joint, nor is it just a sausage joint. It’s three people who know food very well, specifically meat, and even more specifically pork.

They have a jovial and popular existence on social media, and a large number of devotees of their terrific cooking. I’m here to subject the Mutha Porker to BL.com scrutiny.

I stepped into the Kitchens, well one half of it (the other half is across a small courtyard which is in the process of being set up with outdoor seating). I went up to the Bangers and Bacon desk and ordered the Mutha Porker, and was immediately asked “Are you Admiral Burgerbar?” Well, yes I am, at your service.

I was then told how they’d been developing a new burger with a bacon/beef mix patty – would I like to be the first to try it commercially? Another world exclusive for BurgerLad.com.

The Bacon Burger Bomb from Bangers & Bacon. And a beer. All the Bs, all lined up.

It’s the bacon/beef patty topped with streaky bacon, back bacon and bacon jam.

You get the idea though – lots and lots of Bacon. The Admiral is happy, and Mr Bangers and Mr Bacon are also happy.

Seriously, for a small business that seems to appear everywhere, these two chaps have so much energy and enthusiasm for their product and service. Incredibly welcoming.

I handed over my BL.com card, sat down with a beer and waited for the world’s first commercial Bacon Burger Bomb to come out. “Excited” just doesn’t cover it.

A reasonable wait, then out it came with a big smile and an explanation that the bun was not the first choice. If this burger becomes permanent it’ll have a pretzel bun, and the reason for this I’ll explain shortly.

Both Mr Bangers and Mr Bacon took the time to chat about street food, about the Kitchens, about Manchester. It was one of the most amazing welcomes ever.

But, to the burger, presented in a branded polystyrene box. The bun, a brioche, was inadequate, and they know this. The bottom half simply couldn’t hold itself together and for this reason it’ll be a stronger pretzel bun in future. They are already on the case.

The other issue that Mr Bacon was discussing was the cheese. Mine didn’t have any, but as development continues, it probably will. We discussed the merits of Mrs Kirkham’s Lancashire cheese.

So, if you order this in future, and I strongly recommend you do, expect to see it with cheese and on a Brackmans pretzel bun. Bangers & Bacon are big on British produce, local where possible.

Biting into this burger, I noticed a slight hint of pink. It had been cooked right. Not too rare, bearing in mind it’s not just beef in this. And I’m quite sure it’s the only patty I’ve ever had with bacon actually blended with the beef. Good stuff.

Accompanying the patty were three different types of bacon and there’s absolutely no denying that this burger was all about the bacon.

It was the baconest burger I’ve ever had by a country mile. And, I must add in recognition of the few odd people in the world who dislike bacon – I don’t think you’d enjoy this burger.

And if bacon in the patty, and on top of the patty aren’t enough, it also includes Bangers & Bacon’s signature bacon jam in addition to onions and pickle.

It’s a one-of-a-kind burger. It’s no secret that I enjoy my bacon so it’s no surprise that I loved this.

It’s absolutely impossible to describe this without shouting BACON from the top of the fore-mast.

I do hope it stays on the menu, with the modifications, because really it’s very good, completely unique and fits in well with the other menu items.

I cannot thank Bangers and Bacon enough for the warm welcome and letting BurgerLad.com try this outstanding creation first.