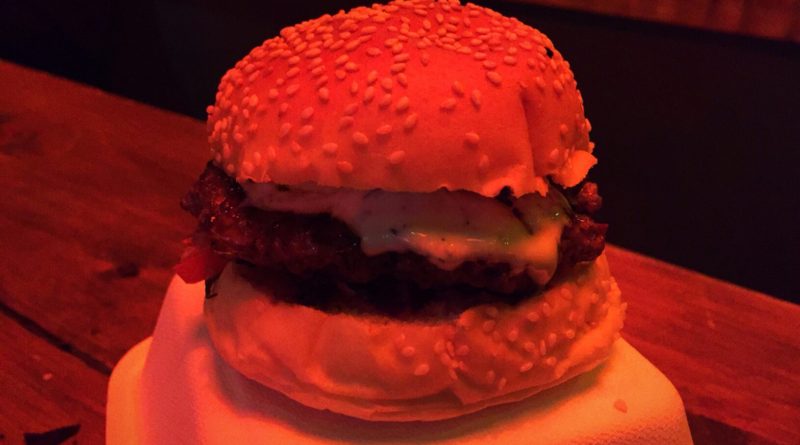 This is another street food classic that has been on my list for a long time, but so far I haven’t been able to track down. I love it when a plan comes together.

Baba G’s pops up a number of places, but today it’s occupying a spot in StreetFeast’s Dinerama, a huge undercover street food extravaganza in London’s equivalent of the Northern Quarter.

Going into Dinerama I was overwhelmed by the volume of people and quality of traders. If I had more stomachs, I could have happily had something from every single one of them. But I made a bee-line for the back, led mostly by my nose.

And I don’t mean that figuratively. The smells coming from Baba G’s kitchen were out of this world. Like your favourite curry house, kebab shop and burger joint had all decided to start cooking in the same place at the same time.

A brief digression on Dinerama for any readers who aren’t aware of it first, then I’ll get to the burger. StreetFeast is essentially JD and Adam, who operate four or five locations, depending on the time of the year, with each having different opening days. Within each location is a number of London street food traders, depending on the space available.

Dinerama is a fairly elaborately built up affair with a kind of inside-outside feel to it, and an entirely casual temperament. At most times, I suspect, it’s difficult to get a table. Last year it suffered a destructive fire (fortunately nobody was injured) which completely gutted the place. In an incredibly quick turnaround, it seemed to be rebuilt and reopened and now it’s almost like it never happened.

It’s a fantastic place and you really ought to go an check it out, but whichever trader(s) interest you, you simply must have a look at Baba Gupta.

In typical street food style, there’s a short menu – 3 burgers and a few other assorted items. When I rocked up, I was looking forward a lot to a proper curry burger. While there are chicken and paneer variants available, it was the lamb one that made it to Time Out’s top 100 dishes of 2015 (I’m assuming London only, but I haven’t checked). It’s clear that it is highly regarded so it was an absolute must for me.

I did manage to score a part of a table beside Baba Gupta, which was sheer luck and for a moment I was content to savour the smells in that corner. Order in, given a number, number called, burger collected, you know the drill.

If it weren’t for the anticipation of flavours and enjoyment of smells, I might have felt a little deflated by the fact that not one of the three men working there was smiling. It didn’t feel awfully welcoming, so I chose not to say hello, and rather just take my burger and get stuck in.

That cold shoulder feeling quickly departed when I opened up my little box. Now, I say little box because this isn’t a huge burger. It is actually quite small for a £7 street food dish (it’s actually still listed as £6 on the website), but in terms of flavour it punches way above its weight.

The lamb has been shaped into a patty of sorts, certainly not perfectly round, which gives it considerable charm. It’s also deliciously spicy, both the seasoned patty and the carefully selected toppings.

There’s an addictive hit that sits down on the front palate and lasts long after the last bite. There has clearly been a vast amount of development in the choice of ingredients here. It’s damn spicy, right enough, and near the top end of my toleration, but as I said, it’s a heat that draws you in and refuses to let go, and does so without trampling all over the lamb.

This little bun may not be life-changing but it is certainly eye-opening and mouth-watering, and definitely requires a drink to go with it. Hot hot hot. But I didn’t have a drink because I didn’t know where to get one without losing my prime table spot. Not for the first time in London, I find myself in a place where everyone, except me, seems to know what they are doing.

Anyway, I digress, back to the burger. If you didn’t think the seasoning was sufficient, there is red onion on this too. That gives an extra crunchy tangy bite but it probably wasn’t necessary. The lamb was cooked and seasoned to absolute perfection and the red onion just tipped it over the edge. Outstanding stuff.

And finally the mint riatha ensure that this tasty concoction is lubricated enough so as not to dry you out, while also acting as a slight balance to the heat elsewhere.

The blurb does say that Baba G’s is all about flavours and colours and there is no lie there. The flavours, well hopefully I have been able to express the flavours in my words. I can only apologise that the amazing colours simply don’t come out well in the photographs, and that is due to the style of lighting at Dinerama – perfectly suited for the mood of the place, but not suited to smartphone photography.

But you get the general idea. This is a unique burger with considerable punch, that should be on any discerning burgerado’s list.