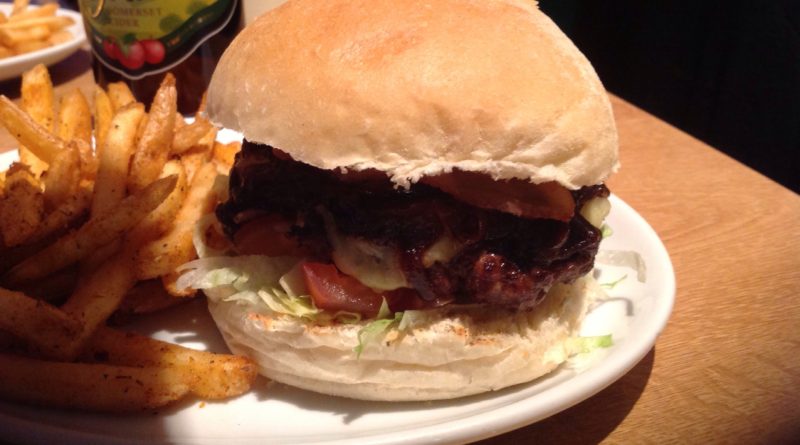 Review of Atomic Burger November Joker “Behind the Sofa” Special

“Thanks Atomic Burger – you’ve still got it! See you in 2014!” and that was how we ended the McLovin review on Saturday 5th October. Here we are just four weeks later to check out the November Joker Special from Atomic.

On the 1st of each month the alchemists of Atomic concoct a limited time offering named the Joker and the latest release is known as the Doctor Who inspired Behind the Sofa burger. For anyone living under an asteroid November sees the release of the 50th anniversary TV special on the 23rd.

How far would you travel for an amazing burger? Well on this occasion it was another 80-mile round trip from BLHQ and once again it was an agonising decision on which of the many tempting sounding creations to go with. But it had to be the Behind the Sofa… especially with a free Atomic Dr. Who pin badge to go with it – now that is a happy meal. And once again we scored free parking within 20 metres of the cantina!

We’ll get behind the sofa soon but first up was the entrée and like suckers for punishment we went with the Fallout Wings again. We’d had them in Oxford before and pretty much got the same response again from the girl serving us. “Are you sure?” After explaining our previous encounter she was definitely impressed remarking “you’ve got strong palates”. That or complete idiots…

If only this picture could convey the pure evilness that is the Fallout sauce – Jiminy jillickers!

I think the base of it is a Frank’s Cayenne Wing sauce or similar but it must have some sort of chilli extract in it too. Now I’ve been “lucky” enough to have some “Fifteen Minute Burn” before so maybe that helped prepare me.

However tis an evil sauce that just keeps giving. It isn’t even in the initial taste but after when it burns… and burns… and just when you think you might be OK it burns you again.

After eight wings in five minutes I was like Rainier Wolfecastle… “The Blue Cheese…it does nothing!” Believe me these bad boys have more After Burn than the 1987 combat flight simulator arcade game by Sega.

I looked at the Wall of Flame and decided against trying the Fallout Challenge III… this time!

I’d been looking at the Boglin on the wall as Duran Duran “Wild Boys” played loudly in the restaurant and the next track was John Parr’s “St Elmo’s Fire” and knew today was a good day.

The table next to us were celebrating a birthday and the other table had never been before but had checked the menu “extensively”. I also had a Thatcher’s Gold to ease the fallout pain.

Just as my taste buds returned to somewhat normal my November Joker, the “Behind the Sofa” arrived and it looked good. I asked one of the amazing staff for some BBQ dipping sauce cause the double-fried Sci Fries really did look beautiful today and were golden, crispy and coated in that delightful chilli rub. Mm mmm!

I really enjoyed that thick seasoning and the BBQ sauce helped sooth my mouth after the earlier challenge of the Fallout Wings. But let’s check out that interestingly named “Behind the Sofa”.

As you can see the patty was cooked to perfection once again with just the slightest pinkness to that natural and juicy tasting beef. We lasted four weeks between visits this time and joked mid-mouthful that we’d probably be back next week. And with the sheer range of burgers on offer here was it not for the drive I think we would be!

This was my first time with bacon at Atomic and this was good. Real good. It had a strong smoky flavour to it which stood out from everything else. It was cooked great too, just bordering on crispy but not too much as I don’t like my bacon too crispy. Yeah spot on and worthy of a mention!

I did taste it with the fresh tomatoes on but they are just not for me so guiltily removed them and promised myself next time I would ask for swapsies maybe.

The Habanero onion relish was sweet, rich and luxurious – I didn’t find it hot in anyway but after the blast zone chicken from earlier was it ever going to be?

The onions retained their sweetness and the relish stuck to the patty and cheese bringing all the flavours of this November special together. I loved the cheese on this burger too and quickly finished it all up.

The thing I find about Atomic is that there are so many choices I always come away thinking that maybe I didn’t have the right choice but it always gives you a reason to go back!

And with that let us take a look at the Will Robinson – this is described as a Burger topped with Swiss cheese, Cajun breaded shroomies and garlic mayo. What I forgot to mention is with any of these you have the option of beef, chicken or veggie.

I really think that this was one of my best shots of the day and was told the burger was very good, and not as greasy as expected (with the mushrooms) and the mayo was spot on. I recall the guy bringing it over saying “good choice”.

We finished our food and settled the tab and in a nice moment the restaurant Manager Leo introduced himself as we had spoken on the phone Saturday evening when I booked the table. Remember booking is always advised!

We exchanged a few 80’s toy stories where I shamelessly plugged I had a Vinyl Cape Jawa and a Blue Snaggletooth (double name-drop) but were interrupted by one half of the “Kondiment Kids” ready to go and play chicken in the passing Gloucester Road. A very nice touch was a couple of Halloween Atomic Badges and an extra Dr. Who one.

I was impressed with the November Joker Special, the “Behind the Sofa” burger. I am definitely going with the Outlaw next time. Atomic Burger Bristol is quickly becoming one of my favourite burger destinations and I anticipate The Return of the Burger Lad very soon. See you tomorrow!

Thanks guys and gals it was very enjoyable and excellent service as ever.

With that and three weeks away from the Doctor Who 50th anniversary let’s take one last look behind the sofa… if you dare! 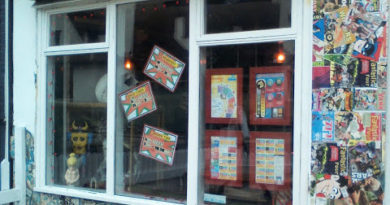 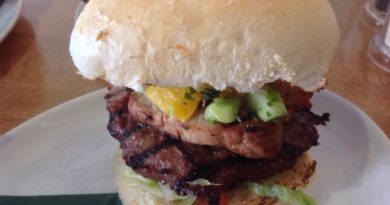 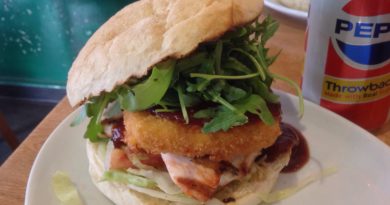