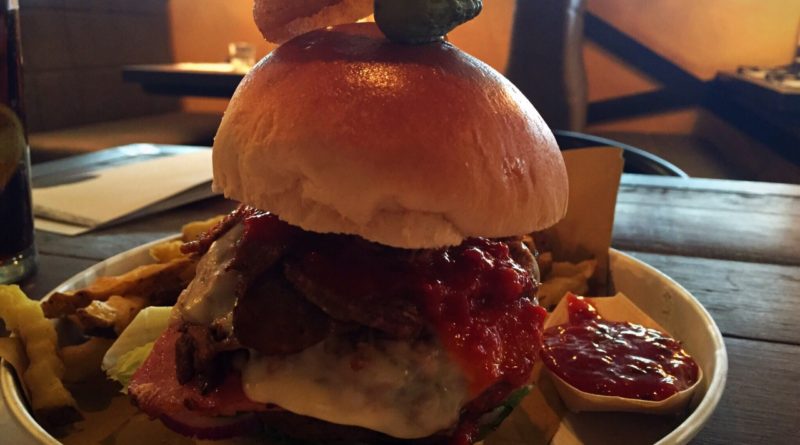 Dirty burger with all the trimmings.

Artisan is one of the new-ish openings from Manchester’s restaurant and bar behemoth Living Ventures.

Situated in Spinningfields above J-list celeb magnet Neighbourhood, the interior is massive and hits the right sort of smart-casual notes.

There are a couple of burger options, but my eye is drawn to the one with “all the trimmings”. (Was there ever any doubt?). It doesn’t actually say what all the trimmings are, so I had to ask.

For £16 you get a beef patty, chicken, pulled pork, Donner meat, bacon, cheese and onion rings, with the latter being on top.

I quizzed the waitress a little more. Can I have the beef cooked the way I want? No – new rules.

I didn’t want to go explaining that they aren’t “rules” per se, because that would achieve nothing, but that’s a disappointing few points knocked off at the outset.

With the right sort of supplier on board, it’s possible to serve medium/rare patties and still satisfy the FSA – just a question of wanting to. (For reference, Almost Famous is about a five minute walk away, and there you can happily get a rare or medium burger).

I also asked about the Donner meat – how was it done – wondering if they had of the skewers ubiquitous amongst late night takeaways.

Again, no. It comes as lamb kofta and is done in the oven. But however it’s done, it’s very much the donner meat that’s the stand out unique and “dirty” ingredient in what is otherwise a stacked, well-done bacon cheeseburger. Let’s see how it goes down…

The description doesn’t specifically mention them, but all the other burgers have them, so it was going to be a safe assumption. They were definitely chips, quite a nice change from fries and they certainly looked the part, crinkly with loads of skin left on.

On top of the burger were two onion rings and a green thing that looked like a dragon scale. I didn’t want that but the onion rings, dipped into the sauce on the side, were rather nice.

In addition to the trimmings mentioned above, there was lettuce, tomato and red onion – so a LOT going on in here. On the face of it, anyway.

Quite a few of the ingredients didn’t manage to stand out in the crowd, most notably the donner and the chicken.

From a texture standpoint, I did get the chicken because it had a nice crispy coating, but the flavour didn’t really come through.

And I had to search for the donner – not loads of it in there. I picked a piece out and sure enough it was actually tasty, but inside the burger it got lost.

That left “dirty” duties mainly to the cheese and sauces which performed admirably to begin with. The cheese gave me some wonderfully gooey stringy moments. I’ll come back to the sauces in a moment when I discuss the beef.

In terms of trimmings, it was all piggie. The pulled pork and bacon made their presence known and were enjoyable. Probably not the very best examples of either that I’ve ever had but perfectly suitable here.

The pulled pork wasn’t overly strong – as a topping it can sometimes take over too much and it didn’t here.

It was a big burger with lots in it, and at its core a very thick beef patty. I think you probably know what I’m going to say here.

This is yet another very good burger more or less spoiled by being cooked well-done. Yes it’s personal taste, and plenty of people will actually want it like this, but not me.

It was really heavy-going. Tightly packed and thick – no detectable juiciness. I have to draw a distinction between the first and second halves of eating here.

To begin with, the overcooked beef was relatively kept in check by all the lubrication provided by the sauces, the cheese and, to a certain extent, the pulled pork. But later on, once these had mostly disappeared, I found my jaw having to do increasing amounts of work to get through it.

So I did what I’m very reluctant to do, and gave up.

Such a lovely burger on paper but the enjoyment evaporated with the sauces and I just couldn’t finish.

There’s nothing really wrong with it, except the cooking, but that aspect is made all the more frustrating when I learned from the waitress that they used to cook it medium.

The loss of some ingredients into the background is relatively common for such a well-stacked offering so I wouldn’t necessarily mark it down for that.

But after speaking to another waitress / hostess at the end, she said the decision to move to well-done only was from group level and was out of their hands in the restaurant itself. And that, unfortunately, does mark it down.

I like Artisan. It manages to nail laid-back and refined at the same time and the staff are top notch. There’s a fantastic-looking section of small dishes which I’ll definitely tackle someday.

But the burgers, this one in particular, and based on what I was told by the two staff, seems to demonstrate exactly why decisions about food should be made by chefs in the kitchen, and not by managers in the boardroom. 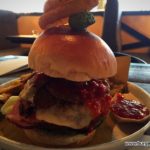