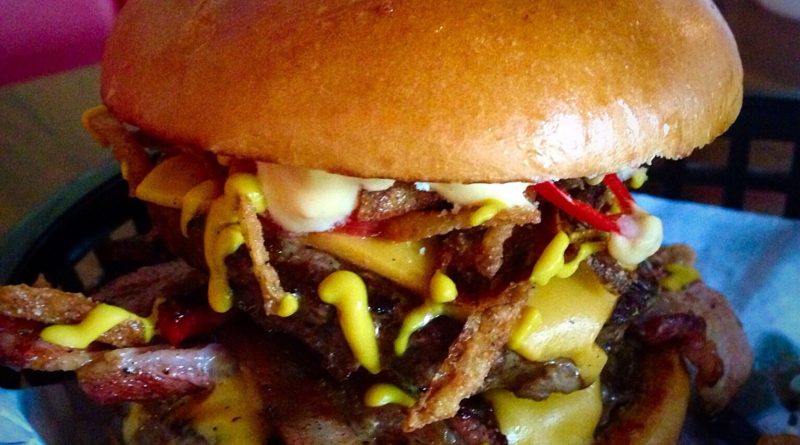 I can’t remember the exact quote from the 1979 British crime drama ‘Scum’, which is set inside a British borstal but it, (to Carlin) went something along the lines of “Jesus Christ you must love it” and that is exactly what I said when I saw our latest guest review from our main man, Andrew.

Calories: almost certainly quite a few.

It’s a car day, which is a shame given the place I’m going to is labelled “burgers and booze”. It’s burgers and car keys today I’m afraid.

On the plus side, the substantial drive allows me to rediscover a 20-year old album – Smash by the Offspring, and it put me thoroughly in the mood for a big dirty burger.

Just as well I’m going to Almost Famous then. The name is rather understated because by all accounts, it’s actually quite famous, and can get extremely busy, even in its new larger unit at Manchester’s Great Northern.

They even have an interesting presence on the network of inter-linked computer machines known as the World Wide Web. Online and in reality, the place is a bit “hipster”, I suppose, whatever that means. I’m not a trendy asshole. I do what I want, I do what I feel like.

I usually have a pretty good idea which burger I’m going to have at places thanks to that network of computers and online menus. But this time, despite a concise menu, I have not the foggiest. Every single burger on there would be worth a taste, but it can have only one. Life can be so very cruel and unfair sometimes.

Anyway, after braving Manchester’s freezing cold and wet interpretation of early summer on my way from the car park, I entered the glory that is Almost Famous. (Well, I didn’t because it opens at 12 and I was early, so I had to hang around the doorway like a plank for a few minutes before they opened the doors).

But after said plankery was over, I found myself a seat and picked up the menu. Order at the bar it says, so I did. I added Winning Fries. There are other fries options but all have things on them, and I suspect I’m in for a big burger whichever I choose, so plain fries are fine.

It has a fabulous selection of ingredients, but so do the other burgers, and the difficult choice was clinched by the garlic butter brioche on which this is served. Sounds amazing.

Speaking of amazing, there are other burgers on this menu that include things like frazzles and beef monster munch. Next time, Andrew, next time.

I can tell even before it arrives, that this is going to be a mighty fine burger.

Service was quick. Before I finished writing this sentence, it arrived on my table. A burger in basket. Fries in a basket. And a roll of kitchen paper for wiping mess.

The fries seem to be a mix of potato and sweet potato, which is a neat twist. “Cracking” as Burger Lad® might say. Both types are perfectly seasoned and very very tasty. Lots of skin, hot, crispy on the outside and a good thickness and consistency.

The burger itself – oh what a stack. I instantly note very generous amounts of bacon and that wonderful shine that a glazed bun has. It’s tall though. And held together with a spike. Is it going to fall apart? Eating this will be fun.

I took my first bite and honestly it wasn’t enough. The tastes burst into my mouth like pyrotechnics at a Rammstein concert. Utterly utterly jaw dropping. With a second bite I realised I can pretty much taste every individual ingredient, including the garlic in the bun.

The chorizo in there is a great touch too. Very thickly cut, its distinct meaty bonanza makes its presence known.

It holds together very well too. The top and bottom burger make good use of the liberal doses of sauce to stick to their respective ends of the bun.

Halfway in, I decide to try the redneck sauce that was put on my table. I dipped a fry in and realised this was the only thing I didn’t like. I’ll put that to the side, but really the fries on their own are so good that there’s not much need for a dip anyway.

Slowly it dawns on me that I’m not going to finish. I’ll definitely manage the burger, but I fear that some of the fries are going to have to take one for the team. It’s a shame, but it’s a very generous basket of fries anyway.

So, for now, I’m quite sure I’ve just had the finest burger I’ve ever tasted outside the M25. Almost Famous – absolutely fabulous. The Baddaboom – badda Bing!

So if you understand me, and if you feel the same, then you will know what nitro means.

Andrew thanks again for this cracking review! M6 and Manchester here we come! 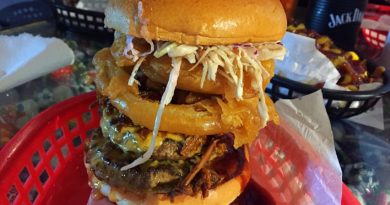 Almost Famous The One Fiddy Burger 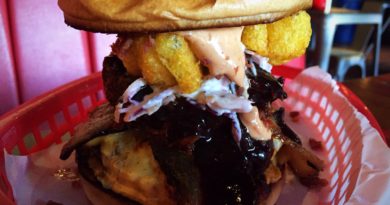 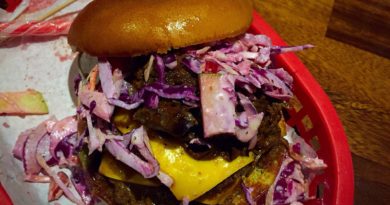