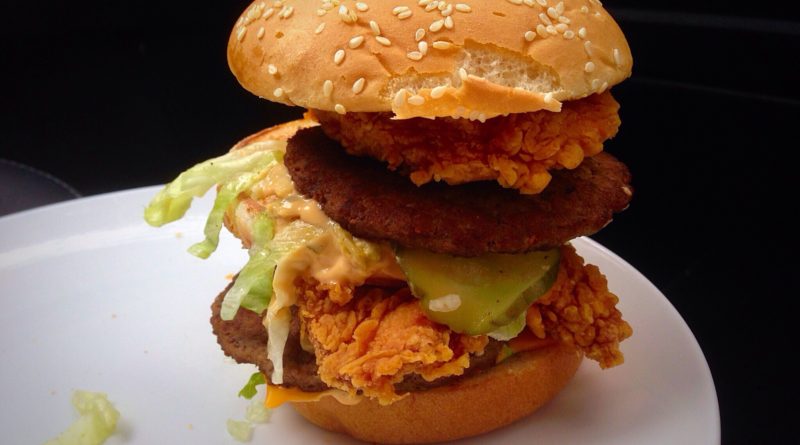 Not that long ago, I said that putting a Zinger into a KFC Ultimate burger was probably the best thing for it.

With minimal effort… with a bit more effort, however, there’s something else. I’m going to bring two high street Giants together in temporary matrimony.

Semi-inspired by the recently released KFC South Korea Zinger Double Down King (pictured below) I’m going to build a Zinger Mac, and even before tucking in, I’m going to say it’s the greatest secret menu hack so far.

In case it isn’t obvious enough what it is, I’ll tell you.

Buy two Zingers, dash to the nearest McDonald’s and buy a Big Mac. Put a Zinger on each level of the Big Mac, thus creating the beefy chicken goodness that is the Zinger Mac.

So, KFC first. Two Zingers, dash back to the car. Hit the road and immediately encounter every red light in Britain, right turners, bad selfish drivers, slow pedestrians, bus and even a sort of tractor thing. Typical!

Anyway, I got to McDonald’s eventually, straight to the drive-thru and ordered my Mac. It struck me that the Mac actually cost less than just one of the Zingers.

I got unwrapping. I don’t like eating in the car if I can avoid it, but the enclosed space allows the smell to build up and it was nice.

I took the Zinger fillets out of their buns and put one on top of each of the Mac’s patties, before closing the lid.

I think at this point I realised why the prices were different. The Zinger fillets were vastly thicker than the Big Mac patties and it showed, both in looks and in taste.

I was keen to get stuck in.

Picking this friendly monster up, I experienced the curse of secret menu items – slide. It’s Nature’s way of telling us when something isn’t meant to be made.

The Zingers were causing the beef patties to slide in and out like that funfair game with the discs that float on air on a table.

There were a lot of classic tastes in here. Beef, cheese, bread, pickle, Big Mac sauce, chicken and spice. Fantastic!

It was the latter that dominated. In the world of high street fayre, the Zinger is a conqueror.

The other stuff was very present too. Flashes of each of the other ingredients zapped around the palette too. Pretty wonderful I must say.

Holding it together was tiresome, a bit of a nightmare actually, but the taste won me over. What it boiled down to more than anything else was a Zinger in Big Mac sauce. A tasty triumph.

I enjoyed it. It filled me up, it tasted great and it was quite fun if I’m perfectly honest.

If you are reading this now, ask yourself – why am I still reading this and not going out to make a Zinger Mac?